[This piece was read aloud by the author, Margarita Cruz, at River Tales, GCY’s live storytelling event on Nov. 5, 2022 in Flagstaff, Arizona.]

Cicadas dance as if their lives depend on it, hold the plant they’ve landed on between their legs and pinchers…when I look up from peeing, I don’t see the bodies of cicadas but the ghosts of what used to be.

I imagine that the latrine group didn’t purposefully do this because of the bouquet of ghosts in front of the groover, but because the view faces a wall of the canyon where, when the sun rises it will come in at an angle that makes your business feel a little like heaven. I imagine the groover crew walking around the camp, just before dark, as they were finding a new space for the groover. I imagine two of them, who have never spoken before that moment, each grasping a handle on the groover and carefully spacing it between the two of them so as not to touch or bang one another. They’re so careful with this poop. 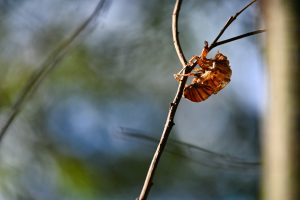 Cicadas can mother up to four hundred eggs at a time. Those eggs hatch after about 10 weeks, then the cicada babies, called nymphs, climb up into the trees and plants around them where they will soon shed their outsides and emerge an adult cicada, ready to fly. They leave their husks, these little yellow transparent exoskeleton of who they once were as a child behind on the plant or tree. Not one of them expects to return to their shells, which are only just a memory they will forget in their short life span.

At camp, as we are all waiting for dinner, I watch a group of students gather around each other to watch one of the girls eat a cicada shell. In one quick bite, the childhood of a cicada disappears. One crunch later, and they’re all screaming and laughing. She smiles as if it’s a game and tells them about her delicious treat. As if it’s hard to swallow up fear as a child, to look a wildness in the face as if it’s always been something familiar. The students on this trip are full of excitement at the idea of it.

During the days, the students hop from raft to raft. The water levels are low this week and many of them are just floating above the floor of the San Juan. They’re swimming and chasing each other for a game of tag that lasts for hours. Each raft works together to hide some of them from one another, quickly gathering them into their bottoms, pulling each of them over the sides, or directing them to hold onto the sides and move as the one who is ‘it’ travels around the rafts. There’s a silent agreement between everyone that they’re working together to hide each other. 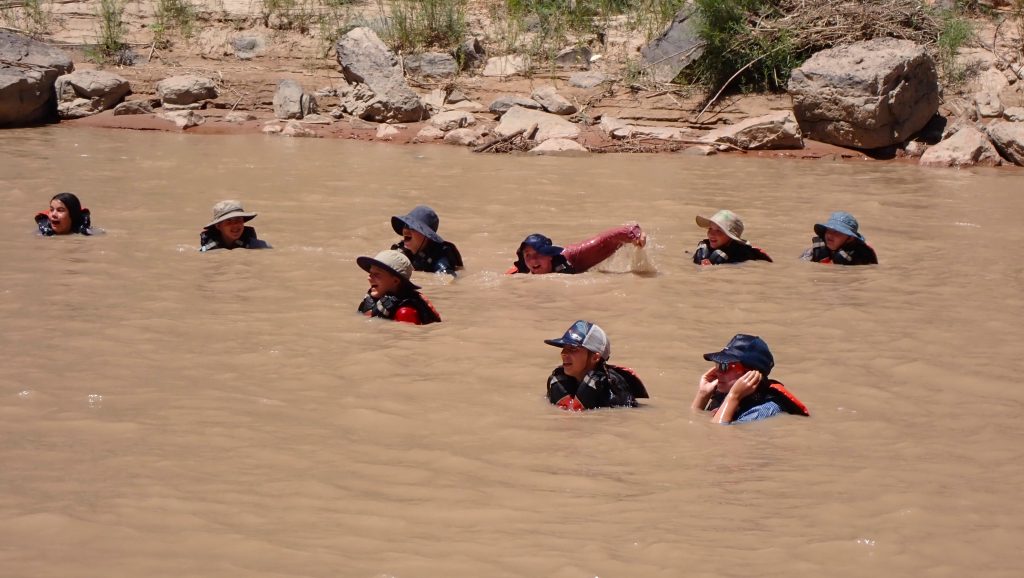 Sometimes, the game of tag is interrupted by the game of water tag, everyone is pulling buckets of water out and each guide schemes which sides of the raft would be best to attack from. There’s a scramble of bodies and buckets, of rowing, and quick commands. Everyone is a flurry of movement and whispering so loud that the raft which we’re approaching could probably hear. I imagine this is the same flurry they have when we land and prepare ourselves for hikes.

When I was studying to be a teacher way back, they taught me that students this young often forget to take care of themselves, but these students prove me wrong. When we land for a quick hike up, I watch as they ready each other with sunscreen and water. Of course, some are too excited and their own peers catch up to them with the hat left behind or a forgotten water bottle. They laugh and joke with each other about it. 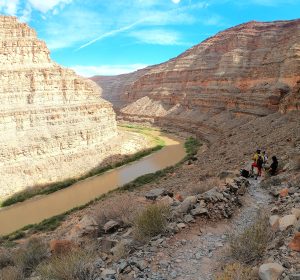 During a particularly hard hike, I stay behind with a student who is pushing themselves beyond their normal limits. I give her my hair tie, we take her backpack, and take a couple of breaks. It’s the middle of July, it’s hot, so she runs out of water before we even hit the top. At every couple of breaks, we sit and listen to our breathing and to the echoes of the cicadas. We ask if she wants to return, but she shakes her head and continues. As we get to the top, we share our water from our bottles so she can keep hydrated. We are applauded as we finally get to the top with all of the others. They are excited to see us, and begin to share snacks and laughter, and most importantly water. There doesn’t seem to be just one student working alone, it feels as if there is a family gathered up on that tall side of the canyon.

Just as time is irrelevant to the cicada, it becomes irrelevant to us without access to our phones the longer the trip becomes. The next few days become a combination of swimming and pulling rafts to avoid catching on rocks and floor. It takes a day or so for them to become comfortable with this new way of living. Even the student who made it to the top last was partaking in more and more group activities.

At the last, most notable rapid, we find ourselves there for hours. Here is where I see all of the students stare wildness in the eye and become unafraid. I watch everyone, including the guides, molt from their shells. I watch students who have been quiet become leaders. Because the water is so low, we end up parking on rocks trying to get through the rapid. We watch raft after raft launch itself out to find itself stuck. We toss a rope to each, file into a line around the rope, and pull. We become one larger body working together. There’s a scramble of bodies and buckets, of rowing, and quick commands.

The rafts take turns going forward. As the raft I’m in inevitably finds itself stuck, I hop around the back, scramble back and forth, and feel the water rushing in. I’m worried that I’ll slip under. I can feel my leg stick between a water jug and the sides of the raft, and then I see them.

I feel the tug of the rope against the raft and catch a glance at them all working in unison, unaware of anything but the need to pull. 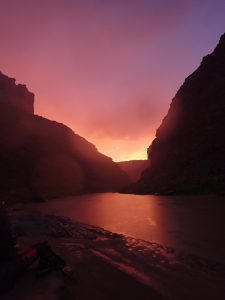 It takes a couple of hours, but we pull every raft out. We camp nearby and find ourselves lucky enough to experience a storm. Everyone gets tents up in less than ten minutes. No one stops to take care of themselves. When one tent is up, they move onto the next. The river blesses us with a golden sunset so bright it lights up the whole camp before disappearing into the night.

The rest of the trip, I watch each of them as if they are suddenly someone new. I can feel the onset of something new growing inside of themselves, something much larger than cicada shells or groover worry. I find in them teachers and leaders. I find them trying new foods they were once afraid of. I find them convincing me to be a kid again, to hop in and play tag and run around in the mud.

I find them unafraid of a wildness, as if it has always been something that has been there.

Humans will live for many different cycles of Arizona cicadas which typically live for a span of two to four years, sometimes longer, sometimes shorter. They will hear them come out mostly during the summer, where the heat makes them happy and the sound of their bodies buzzing warn of incoming summer rain. They will always be born, always bury themselves before crawling up and out to shed their younger selves.

I wonder if they will always remember the moment they discovered who they were. 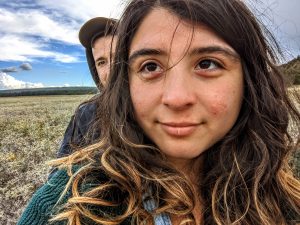 Margarita Cruz received her MFA in Creative Writing from Northern Arizona University. She is president of the Northern Arizona Book Festival, contributor for the Arizona Daily Sun, and daylights as a creative writing teacher at Flagstaff Arts & Leadership Academy and Northern Arizona University. Her writing has received support from Tin House, and she has been featured in PANK, Rattle, and the Academy of American Poets among others. She is a first generation Chicana and writes to find herself. Find more of her writing at shortendings.com. Margarita did her first trip with GCY in 2022 as a trip coordinator on the Lower San Juan River.